It’s been just about a month since the Warriors dethroned the Cavaliers and took home the title, but boy do things look significantly different in the league now.  The Draft took place, stars got massive contracts, and a few blockbuster trades have taken place.  Amongst this we saw Jimmy Butler traded to Minnesota, Paul George go to Oklahoma City, Paul Millsap head to the Nuggets and Gordon Hayward opt to sign with the Celtics.

While Hayward may be coming East, the loss of the other three to the west widens the already large talent gap between the two conferences.  After all these moves,

FiveThirtyEight says that 22 of the NBA’s 30 Best players will now be in the West, a staggering difference and the largest since 2003-2004.   With this talent disparity, it appears that the Eastern Conference Playoffs will be a joke and the All- Star game will be even more unwatchable.  An apparent, looming Warriors-Cavs matchup plus the drastic talent difference has people saying the NBA is getting worse after already being in what was claimed to be a weakened state last season.

Well guess what, the league isn’t getting any worse.

In fact, with all the stars going West, the league is just getting better.

Last season continued to show why NBA is still at one of its best points ever.  The league set an attendance record for the third year in a row, playoff ratings were up 5% throughout, and the league had the highest rated finals in the last 20 years.  Having two months of playoffs and a strong talent pool has helped the league continue to gain a lot of popularity.  The NBA, if anything, is at one of the higher points in its history and is continuing to trend up not just nationally, but globally.

And next season, things will only get better.

The first thing that will help will actually be how stacked the West is.  With Chris Paul being traded to the Rockets, they join OKC, Minnesota, and the Pelicans as non-Warriors teams with multiple top-30 players.  They won’t dethrone Golden State, but it will be interesting to watch and definitely will give the Warriors a greater challenge.  It also just makes for more excitement in the NBA because more games will reel in viewers who are not avid followers of the NBA but want to see some of the games best and brightest on the same side.  The playoffs will also have exciting matchups full of stars on both teams from the first round.  With the Warriors, Spurs, Thunder, Rockets, Timberwolves, and the Pelicans involved, two of those teams will have to play right away.  It’ll generate more viewers from the moment the playoffs begin and the ratings will continue to grow.  Not to mention the fact that the Trailblazers, Clippers, Grizzlies, Nuggets, Jazz and maybe even the Lakers (Lonzopalooza!) will be fighting for only two playoff spots.  This will surely keep many fans hooked until the end of the season to find out if their team makes the playoffs and bring more intrigue to the regular season.

Now while I praise the West, I know many of you sitting at home and are saying 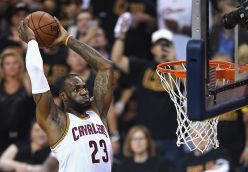 something along the lines of how the East is now a dumpster and will surely even out what the West adds by diminishing.  It’s a valid point, but in reality nothing will really change in the East.  If anything it will get even better from a viewing perspective. Even with the stars going west, the top four is almost identical.  The only real change is Hayward going to Boston, which makes them match up to the Cavs a little better, but not even close enough to win a series.  In the end, the East was always going to still be LeBron’s unless Boston acquired George or Butler, so why does it matter if there’s a little less talent outside of the top four.  If anything the conference stills brings a lot of excitement with The Greek Freak continuing to make the Bucks more of a contender and the trio of Joel Embiid, Ben Simmons, and No. 1 pick Markelle Fultz trying to complete the “process” in Philadelphia.

With all this excitement and curiosity about numerous teams going into next season, why should we believe the NBA is getting worse?  The season was great last year even though we knew a Cavs-Warriors match up was on the horizon.  While many expect another rematch, it will be captivating to see if a new threat arises.  The NBA is going to continue getting better next season.

And it has this western migration to thank.

View all posts by Andrew Park