It’s time to start thinking about fantasy football again and with that comes the question of deciding whether or not to take any rookies this season.  Rookies tend to be of tremendous value as, generally, people refrain from taking them early.  For example, last season, outside of Ezekiel Elliott, the highest Average Draft Position for a rookie in standard leagues was 70th (Derrick Henry).  So the question is which rookies are going to be of the best value this year in fantasy football?

First of all, let’s look at the five rookies with the highest ADPs so far this year in standard leagues.

The entire top five is composed of running backs, which is probably the most reflective of this year’s rookie class, but there may be hidden gems at other positions.

This is the easiest position to discuss.  There are really only three candidates and one of them definitely won’t start next season.  The first round picks are Mitchell Trubisky, 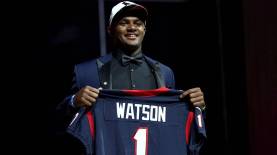 DeShaun Watson, and Patrick Mahomes.  Mahomes will certainly be spending this year learning and developing as Alex Smith maintains his starting job in Kansas City.  Chicago understands that they are rebuilding and seem content to let Mike Glennon start this year instead of rushing Trubisky’s development.  While DeShaun Watson may not be number one on the Texans depth chart to begin the season, as that spot should belong to Tom Savage, he has the best chance of surpassing the person in front of him as the Texans plan on competing this year.  The Texans play in a relatively weak division and should feel confident in their ability to win the division if they can beat out the Titans.  Not to mention of the three he has the best players to throw to, that being DeAndre Hopkins, C.J. Fiedorowicz, Jaelen Strong, and Will Fuller.

Fournette was the highest drafted running back in the class and currently has the highest ADP for a reason.  He is a tough physical downhill runner that can make defenders miss from time to time.  However, his selection here deals more with the competition all the 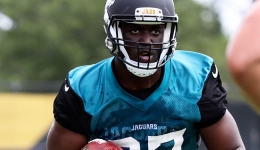 other backs face in their backfield.  Joe Mixon will have to split carries with Jeremy Hill and Giovani Bernard, both of whom have carved out major roles in the Cincinnati offense over the last few years.  Plus with a healthy A.J. Green and now John Ross, the Cincinnati offense could become more of an aerial attack this season.  McCaffrey isn’t a terrible choice, as he will probably beat out Fozzy Whitaker and Cameron Artis-Payne, but long time lead back Jonathan Stewart remains in his way.  McCaffrey is far superior to all three of these backs in the passing game and will be a good pick in a PPR league despite Stewart getting most of the goal line carries.  Dalvin Cook actually was initially my first choice in this spot, as I think he has the most complete game for the modern NFL, but he won’t get carries with Latavius Murray in Minnesota.  I would monitor this situation because Murray has fumble problems and quickly lost the trust of the Oakland coaches.  There would be games when Murray just wouldn’t play the fourth quarter and if these fumble problems persist we could see Cook getting more and more carries as the season progresses, making him potentially a good late round pick.  Samaje Perine is a player that fantasy experts have been calling underrated this season ever since the draft. The Redskins couldn’t figure out their running back situation last season and probably won’t this year, as they have just added another back to join Rob Kelley, Chris Thompson, and Matt Jones, and this brings a boatload of concern to Perine’s value. With all these other factors considered, Leonard Fournette has to be the selection despite potentially sharing the passing downs with T.J. Yeldon and some short yardage carries with Chris Ivory.

Three wide receivers selected in the first nine picks and none of them were the selection at this position.  Mike Williams could potentially be out for the season and even if he is

healthy, he would still have to compete for targets with Keenan Allen and Tyrell Williams.  I have doubts about Corey Davis’s ability to be the number one receiver for the Titans although he should be helped by the presences of Delaine Walker and the running game of DeMarco Murray.  John Ross would be a great pick and I love taking number two receivers in fantasy football because they never attract the most defensive coverage. However, I think Zay Jones is in a better place to succeed as a number two receiver.  In Cincinnati, A.J. Green demands the most targets on the team and Tyler Eifert will probably be second in that category.  On the other hand in Buffalo, Zay Jones will likely surpass Charles Clay for the second most targets on the team behind Sammy Watkins.  The combination of Sammy Watkins deep ball ability and LeSean McCoy/Tyrod Taylor’s running abilities should open up the middle for Jones to torture defenses.

Evan Engram had this pick locked up, but then he went to the team with the best receiving corps in all of football and will struggle to get enough targets; especially if a lot of his duties revolve around helping Ereck Flowers on the pass rush.  O.J. Howard should do well but he is fourth in line for targets behind Mike Evans, DeSean Jackson, and 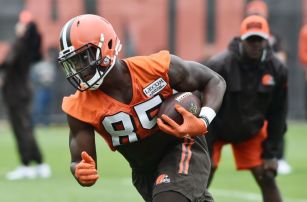 Cameron Brate on a team with a strong running game.  However, David Njoku will be playing as the lead tight end for the Cleveland Browns, which puts him in an ideal scenario to succeed.  Younger quarterbacks and struggling quarterbacks like to throw to their tight ends who can go into a soft spot in the defense and just sit.  Njoku will provide that option for Cody Kessler/Brock Osweiler/DeShone Kizer as well as having the athletic ability to stretch the defense.  Jordan Leggett should be able to provide this same sit down and block service for the Jets and their clown show at quarterback and may be able to grow into a bigger role as the Jets seem to be committed to using their tight ends more this season after barely throwing to them in the past two years.  At the end of the day, Njoku provides a solid floor that should produce on a week to week basis with the ability to explode any given week.

When we talk about players that are going to be boom or bust for a whole week, everybody has a threshold as to how much risk they can take.  Rookies are the ultimate boom or bust because we know nothing about them.  I personally like to draft one rookie every season because perhaps they could be the one.  This is generally after I have filled out my starting roster and am trying to find a diamond in the rough.  Hopefully I have helped guide you towards making a decision on what you will do with the rookies during your draft this season.

View all posts by Baasil Ebrahim