I just read a book called Problem Solving 101 and one way to solve a problem that was discussed was finding the root causes of a problem and analyzing the best way to solve those.  I think that author Ken Watanabe was on to something and we can use this concept to solve the current NBA drama revolving around Kyrie Irving and Carmelo Anthony.

Recently Anthony said that he would be unwilling to waive his no trade clause for a trade to the Cleveland Cavaliers making a swap based around Carmelo and Kyrie impossible.  However there may be a way that we can solve all the issues revolving both players and all teams involved.  First let’s look at the wishes of every player/team.

Carmelo Anthony: Wants to go to Houston to play with James Harden and Chris Paul if traded

Kyrie Irving: Wants to be the focal point of a team; likes Knicks, Timberwolves, Heat,

Cavaliers: Want to be able to trade Kyrie Irving to make sure there is no locker room beef, but require a star in return, preferably at the point guard position

So we know that Carmelo wants to play in Houston which is doable, however Kyrie Irving’s requests are looking a little different.  The Spurs know that they are aging and don’t want to trade their future for Irving which makes this an unlikely destination especially with no stars to offer outside of the untouchable Kawhi Leonard.  The Cavalier would only trade with the Timberwolves for Andrew Wiggins however the Timberwolves were recently working on a big extension for Wiggins so this seems unlikely.  The Knicks and Heat seem to be the only two plausible destinations for Kyrie.  A trade with the Knicks would likely require someone to facilitate, such as the Phoenix Suns so let’s see what the Suns want.

So, it seems as long as the Knicks are able to send picks or Frank Ntilikina to Phoenix, a trade could evolve with Eric Bledsoe headed to Cleveland but the Knicks still want to trade Carmelo.  However, Carmelo only wants to go to Houston so let’s see what Houston wants.

Rockets: Add one more non-guard star to build a trio to compete with the Warriors in the West, preferably lose the Ryan Anderson and/or Eric Gordon contracts

There is one way in which all the teams can be happy and it is a trade that looks like this.

This trade works out for everybody to get what they want. 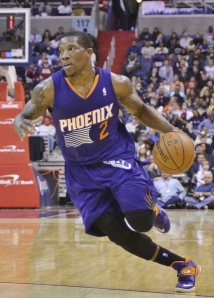 The Cavaliers are able to deal Kyrie while getting Eric Bledsoe, a player who LeBron trusts, back to help run the point.  Trevor Ariza will contribute to the team as a rotational player who can come in and provide good defense and three point shooting.

The Knicks are able to acquire Kyrie Irving and create the combination that they want with Kyrie and Kristaps that should help make them a more attractive destination for free agents and a competitor in the weak Eastern Conference. They take on the Eric Gordon contract which will expire before they have to pay Kristaps and they can transfer the money they were using to pay Gordon to Kristaps.  The only real downside that there will be one year that they have to pay Kyrie, Kristaps, and a terrible Joakim Noah contract.

Houston is able to receive the final star they need to complete their starting lineup without giving up much outside of their current starter in that position (Trevor Ariza) and some role players.  They are also able to kill two birds with one stone as they drop the Eric Gordon contract.  Even if they have to give up one more role player in this trade, I think they will be happy with the deal.

The Suns add a big contract but should could be able to reach a buyout with Frye so they can continue to see their young big men, Marquese Chriss, Alex Len, and Dragan Bender, develop.  They also get the young pieces they need in Frank Ntilikina and two draft picks.  This is their payment for facilitating this trade.

This trade may seem impossible and infeasible however, if the four teams realize what they really want this offseason they will see that this trade accomplishes all of their goals.

View all posts by Baasil Ebrahim