What holds LeBron James back does not manifest itself on the basketball court. James’ singular combination of raw athleticism, refined skills, and unreal instincts has made him the greatest player in the world. The on-court success has followed suit as well: 4 MVPs, 7 consecutive Finals appearances, and 3 championships. And yet, LeBron has not been able to overtake Michael Jordan for greatest player of all time. The public perception of LeBron has always been surprisingly negative; no matter what LeBron does, the fans always find a way to flip the narrative against him. Whenever LeBron loses, the weight of the loss is placed squarely on his shoulders, while any wins are attributed to his “strong” supporting cast. This unshakeable perception is going to follow LeBron into his 2018 free agency, and LeBron’s final destination may have less to do with his likelihood to win a title and more to do with his public perception and his brand. LeBron’s most likely destinations next year each offer him something different, and his eventual choice will say a lot about what LeBron cares about most.

LeBron’s most likely, and possible safest, choice is to return to Cleveland once again. Staying in Cleveland for the rest of his career would be the best route towards erasing that negative public perception and ensuring his legacy among the game’s greatest. Fans would actually rally around LeBron if he committed to the Cavs long-term and made his hometown team great with his generational abilities. For now, the talent on the Cleveland roster is solid, giving LeBron the supporting cast necessary to extend his Finals streak in a weak Eastern Conference and potentially win another title. If LeBron could capture another championship for the city of Cleveland, he might become a hero, finally shaking the narrative that has haunted him.

While this path would lead to a change in narrative, LeBron might not find the success he wants in Cleveland. The Cavs have a competitive roster now, but if LeBron will be in Cleveland for the foreseeable future, then that roster may crumble around him. Cleveland’s cap situation is gruesome and many of their assets are already gone. Without flexibility to sign free agents, or even retain the ones on their own team, Cleveland will become bereft of any meaningful talent (outside of LeBron) and 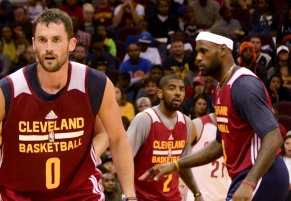 won’t be able to replace it with high-level young players. Moreover, the insane concentration of talent on the Western Conference’s elite teams will make it nearly impossible for LeBron to win another championship in the next few years. The Cavs roster growth has stagnated since their championship, while the Warriors, Rockets, and Thunder have all added valuable pieces. LeBron could certainly change his public perception by staying in Cleveland, but the on-court success may not follow, now or in the future.

If LeBron is to leave, it seems that he would sign with the Los Angeles Lakers. The Lakers are arguably the most decorated franchise in the modern era NBA, located in the second largest city in the United States; LeBron’s brand would grow exponentially in that environment. While LeBron cares about his legacy, his brand and business expenditures will be his life post-basketball, much like MJ has done. If LeBron cares about his business, Los Angeles is the best destination for him. On the court, the Lakers are very enticing to LeBron as well. LA has one of the best cap situations in the NBA, offering them the flexibility to sign LeBron and other key free agents. Also, the Lakers have accrued several young pieces through the draft, such as Lonzo Ball, Brandon Ingram, and Julius Randle. Similar to when LeBron came back to Cleveland, Los Angeles could create a dynamo by adding LeBron to a budding young core.

The arguments for LeBron to go to Los Angeles actually become quite overwhelming, but the one thing holding him back is by far the largest: public perception. LeBron would be vilified by the media, fans, and even NBA personnel if he walks from Cleveland to go to Los Angeles. It’s not hard to write the narratives against LeBron if he leaves, either. Los Angeles has been pretty terrible the last few years, but they have received several high draft picks and are clearly on the rise again. LeBron would be labeled a “ring-chaser” once again, with the ability to manipulate a cheap, young roster whichever way he chooses. Also, Cleveland would be left in disarray with no cap flexibility, no assets, and no real shot to win without LeBron. Cleveland fans would likely burn his jersey again, and many people would hold this move against him when comparing LeBron to the greats. The perception would certainly be negative, but LeBron must weigh that against building his brand.

Los Angeles and Cleveland may be the two most discussed destinations for LeBron, but other franchises have to be taken into account. One in particular may have a certain intrigue for LeBron: the Houston Rockets. It has been widely reported how close LeBron is to fellow NBA players Dwyane Wade, Carmelo Anthony, and Chris Paul, a.k.a. the “Banana Boat Gang.” If LeBron chooses to team up with his friends and try to win a title in that way, Houston will be that team. Chris Paul – currently the second-best of the four players – is already in Houston, and Carmelo is attempting to will into existence a trade from New York to Houston. Wade could follow those two to Houston this year, potentially on the cheap, if Chicago buys him out in an attempt to rebuild. That opens LeBron to be the final member of the BBG to join the Rockets and create a fun superteam with his friends. The problems that arise from this scenario are immense, though; notably, this would be a hefty expenditure for Houston, and would exhaust them of their cap flexibility and their assets for the next half decade or so. The Rockets would have minimal depth as well, considering that Harden, Paul, Carmelo, and LeBron currently command over $100 million on their own, well more than the current salary cap. Their fifth starter (a center) and the rest of their bench would have to be minimum salaried

players. LeBron himself might have to take a pay cut to create the BBG team, which would contradict what he has openly stated about player salaries. There are a number of factors working against LeBron and his friends teaming up in Houston, and the team might not be as successful as one would think, but it should at least be considered a possibility in LeBron’s 2018 free agency.

There is one last option for LeBron that may not even cross his radar, but may actually allow him to have the most on-court success of any franchise in the short and long term. That team is the Philadelphia 76ers. As far as off-court issues go, this move makes zero sense for LeBron, his brand, and his image. The media and fans would blast him just as they would if he departed for any other city, and Philadelphia at best is a neutral move for his brand, if not a downgrade. Aside from that, though, the 76ers are a perfect fit for LeBron. For one, they are in the Eastern Conference, allowing LeBron to take advantage of the power vacuum. Also, much like the Lakers, the 76ers have stockpiled young assets and cap flexibility, but with one provision: their young players and assets are far superior to the Lakers. The core of Joel Embiid, Markelle Fultz, and Ben Simmons outflanks Ball, Ingram, and Randle handily, not to mention Dario Saric, Timothe Luwawu, and Robert Covington. Moreover, the 76ers still have more draft picks coming, including an extra one from either the Lakers or the Kings, which will allow them to supplement their core for years to come. Their cap situation is likely the best in the NBA, too; next year, the 76ers are on the hook for just $18 million in salary. Even with the inevitable extensions Philadelphia will hand their rookies, that space offers Philadelphia the chance to sign multiple valuable role players, especially once other teams are hard-capped after the last few years’ free agency blunders. With a unique combination of talent, assets, and cap space, the 76ers with LeBron would be a contender for the next decade.

LeBron’s choice, no matter where he goes, will be imperfect. LeBron will almost certainly take some backlash from the media and the fanbase. But LeBron’s decision should be his and his alone, and it will speak volumes about what he wants out of his basketball career, on or off the court.

View all posts by Jack Lane