The first weeks have given us a lot to think about what could be this year, both good and bad.  Question marks surround big teams like New England, Seattle, Green Bay, and Dallas while the Kansas City Chiefs have come out flying so far.  How will all these teams fare week 3?  You’re about to find out.

If you loved the sloppy low scoring affair of last week’s Thursday night game, this is right up your alley.  This will be Jared Goff’s first road game of the season and while he may struggle against a surprisingly good 49ers defense, he has the luxury of playing Brian Hoyer and a 49ers offense that is only averaging 6 points and 232.5 yards per game.  Granted that was against Carolina and in Seattle, but the Rams defense won’t make things any easier.  Expect the Rams to cover and win a slugfest with Todd Gurley carrying the offense after a bounceback last week (16 for 88 yards, 1 TD).

This game is being played in London or should we say Jacksonville 2.0.  The Jaguars have played overseas each of the last 4 years going 2-2 in that span including winning each of the last two years.  Baltimore has never had to make this trip so travel could play a factor in this game. Blake Bortles has underwhelming career numbers in London (55% completion percentage,4 TDs , 2 INT) and Baltimore’s outstanding defense will not help.  However I think Jacksonville’s defense will win them the game, with Joe Flacco having to play against the best secondary he’s faced this season and Jacksonville being able to focus on stopping the run.

Being a Jets fan has been about as rough as expected so far, and it’s not going to get better.  The Jets have been getting torched on the ground to a tune of 185 yards a game and their luck won’t change facing Jay Ajayi (111 yds vs the Chargers Last week).  Cutler will do just enough to help the offense flourish and Miami will win and cover on the road while Jets fans leave after three quarters. 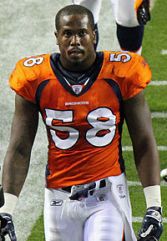 as they travel to Buffalo for their first road game of the season.  The defense has been strong and the offense has been getting the job done behind strong performances from Trevor Siemian (65% Completions, 6 TDs) and C.J Anderson (154 All purpose yards, 2 TDs vs Dallas). Siemian will surely be tested in a hostile environment coming off a big game like Dallas. With LeSean Mccoy injury rumors flying around, I’ll take Denver to move to 3-0.

Pittsburgh is coming off a strong home win as they beat Minnesota last weekend.  While they look to gelling together better offensively, they also haven’t beaten great quarterbacks so far (Rookie Deshone Kizer and Case Keenum).  While I think they beat the Bears, this will be a game that is closer than you think with the Bears trying to rebound after a rough loss and Big Ben’s road struggles (113 Passer Rating at home, 82 on road since beginning 2016) coming into play.

Despite all the talk about getting the biggest contract in football, Matthew Stafford has shown his value.  After signing the 5- year,135 million dollar extension, Stafford has come out firing in 2017 with 414 yards, 6 touchdowns and most importantly two wins against two top half defenses in Arizona and the New York Giants.  Atlanta was great last week, but has always strong at home with 35 ppg there last season.  During week 1, Atlanta struggled against Chicago, despite the short week, Detroit pulls off the upset at home.

When the Browns are favored on the road, you know you shouldn’t watch the game.  Cleveland looked stifled against a great Baltimore defense week 2, after putting up a good showing week 1.  The Colts aren’t the Ravens, but they did look strong in a close loss last week at home.  Indianapolis isn’t an easy place to play, and the young Browns will learn that this weekend as Jacoby Brissett gets Indy through by a hair.

This is the bottom line of this game (and why the spread isn’t available) is that Minnesota wins with Sam Bradford starting and they’ll lose if Case Keenum starts.  Bradford’s injury flew a bit under the radar but is really important for the Vikings who are competing for a playoff spot in the NFC this year.  They say he’s day to day and did practice on Wednesday, albeit in limited capacity.  A game like this is one they need to win if they want to establish themselves as contenders for a wild card and this quarterback decision will go a big way in deciding the outcome of the game.

Tom Brady appeared to be back last Sunday throwing for 447 yards and 3 touchdowns in New England’s 36-20 win over New Orleans.  While many claim Brady is back, but putting up numbers against that porous defense proves little.  Brady should get a better challenge with the strong Houston defense this week and could struggle against them, the Patriots will still pull this one out easily against a Houston offense only averaging 234.5 yards per game so far (31st in NFL).

Despite the loss last week in Kansas City, the Eagles seem to be trending in the right direction which is something I can’t say for the Giants.  Eli Manning looks like he’s done, but the team is crumbling because of its atrocious offensive line and inability to run the ball.  The Giants average 48.5 rushing yards per game, worst in the NFL, and nothing has shown that’s going to change.  Eli might get better, but this line play will not and the Giants will drop to 0-3, failing to score 20 points in their ninth consecutive game.

Carolina has struggled offensively early on, I understand, but I don’t think any unit has been as bad as New Orleans defense.  The Saints are conceding 512.5 yards and 32.5 points per game already this season and this could be where Carolina gets their groove back.  Cam Newton will surely have a better performance, but the big impact this game will come from Christian McCaffery and Jonathan Stewart who will torch the Saints on the ground.

This will definitely be one of the most interesting games of the week, with both teams aspiring for the playoffs but stuck at 1-1.  Of all the units in football, (Lines, Secondaries, Receivers etc) the Seattle Offensive line might be the worst of them all.  Russell Wilson has felt pressure all over as a result.  Despite this, I think Seattle pulls off the upset.  They showed some signs of running the ball last week and Tennessee doesn’t have an insane pass rush.  Combine that with the slow starting Marcus Mariota facing the Legion of Boom and I think Seattle wins ugly.

Despite the week two loss, the Packers weren’t insanely bad and this is the perfect bounceback game for Aaron Rodgers and co.  Cincinnati looks completely disjointed on offense with the offensive line struggling after losing Andrew Whitworth and Kevin Zeitler in free agency.  This has exposed Andy Dalton’s lack of mobility and ability to make plays on the run which won’t get easier this week.  Even with the extra rest, playing at Lambeau will continue to expose a team that looks like a giant wreck (although I think they have one touchdown in them).

Kansas City has looked like one of the most dominant teams in football in the first two weeks.  They’re averaging 7.6 yards per play, best in the league and have put on displays versus the Eagles and the Patriots early on.  Kareem Hunt has looked like a mid-round steal out of the backfield (355 all-purpose yards and 5 TDs) and the defense has looked alright despite losing Eric Berry.  The Chargers will make this a close one, but the Chargers will also continue to drop these close games once again (2-10 in one score games since beginning of 2016).

Oakland has come out firing the first two weeks and Washington showed some life after a rough week one lost against Philadelphia.  Both teams are along the top of rushing offenses (146.5 a game for Washington and 144.5 for Oakland) in the league and could use a win to keep up the competition in their competitive divisions.  While the Raiders did look very suspect on defense last week, I think they have enough to pull this close one out as Kirk Cousins still doesn’t look like himself.

Despite the pounding in Denver, the Cowboys are just fine.  The offense was obviously a little exposed as the running game failing to get established, but this should be a good chance to bounce back.  The Cardinals have been on and off offensively in both games so far and last twp=o weeks David Johnson-less version wasn’t very encouraging.  Peterson will take Dez out of the game, but the Cowboys will bounce back and roll over the Cardinals by refinding their ground game (129 yards week 1)

View all posts by Andrew Park